OLF Considers the March 8 International Women’s Day as a significant Historical Event and denounce the Human Rights violations against Women in Ethiopia.

The Oromo Liberation Front (OLF) see the International Women’s Day a significant historic event that highlights contributions and achievements of women in all aspects of human lives including family formation, and the role of Women in political, economic, social and peace and stability of a nation. However, in Ethiopia, we remember the International Women’s Day with Sadness and grief as the Human Rights Violations of Women reached immeasurable stage. We are immensely saddened by the cruel mistreatment of Oromo and other Ethiopian Women in every walk of their lives. Women of all ages are subject to rape, detentions, killings, torture, and brutal inhumane treatments by the consecutive regimes of Ethiopia. Particularly in the last three years, under Dr Abiy Ahmed’s regime, atrocities of women were excessive and still are. The Oromo, Tigrean, and other Ethiopian Women are subject to continuous brutality and harassment just because of their identity and political views.

As we speak, Oromo and other Ethiopian Women’s’ and mothers are suffering under suffocating abuses of Prosperity Party’s armed forces, Amhara Militias and Eritrean soldiers in many parts of the country. The victims are not only Women but also their infants and children, who are exposed to various types of physical and mental tortures together with their mothers. In Ethiopia, Women and children are not only devoid of basic human rights but also live in violence, fear, anxiety in their own homes and localities. We are overly concerned about these continuous mistreatments of Women and children by the armed forces of ruling party and the prosperity party officials as this had caused and still causing breakdown to many families of Oromos and other Ethiopians. This has detrimental impact on the future generation as children grown up in war, violence and Government abuse will struggle to be good citizens. Particularly, women in conflict zones and in drought-stricken areas are extremely exposed to danger of life.

We believe that human rights abuse of Women and children in Ethiopia is against the national and international Human rights laws. It is sad that the political and human rights crisis in Ethiopia is not only destroying the country but also ruining the private lives of Women and families and the citizens are unable to survive at least under destitute peace in their own country. We want to stress that the ruling prosperity party is accountable not only to the destruction of the country but also to the damages done to Oromo women, children, and families. We would like to inform the Oromia citizens and the Ethiopian oppressed nations and nationalities that Women and children are under the constant abuse by the ruling prosperity party, and you must stand in unison to protect Women and children and your families. 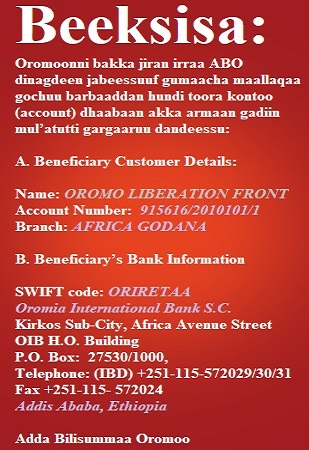